Left: Rendering of Our Memories by Judith Modrak in Thomas Paine Park. Right: He Thought This Was Going to Be a Year of Good Fortune, by Gillie and Marc, to be installed in Foley Square. The installations are part of the city Parks Department’s Public Arts Program. Photos courtesy of Judith Modrak and Gillie and Marc

Two temporary sculptural works are coming to the Civic Center, and they could hardly be more different. Yet each will offer its own appealing counterpoint to the stone­cold halls of justice and government that surround them.

Next month in Foley Square, near the corner of Centre and Worth Streets, you will find the 900­pound, life­sized bronze sculpture of what its creators, Gillie and Marc Shattner, call their dogman. The creature, a recurring motif in their work, has the body of a man in a business suit and the head of a hound. For this one, titled He Thought This was Going to Be a Year of Good Fortune, their dogman is seated, a shiny red apple in his hand.

The collaborating artists, who are married and based in Australia, say on their website that the dog­man concept is inspired by the philosophy of ancient Egyptians, who believed that “by placing the head of an animal on a human, the person could take on some of the qualities of that animal. Gillie and Marc are dog lovers, and they believe the qualities of dogs— unconditional love, loyalty—are beautiful, and maybe something all humans could benefit from.”

The piece, which will be up only through May, is being sponsored in Foley Square by the Chinatown Partnership, a business improvement district. Its executive director, Wellington Chen, said the sculpture ties into the Chinese Year of the Dog, and red is a symbol of good luck. (“We always want a good omen for the Lunar New Year,” he said.) But more importantly, he told a Community Board 1 committee this month, the installation is part of an experiment to help bring more visitors to Chinatown, a neighborhood that he said continues to suffer as a result of security barriers. Though just outside of Chinatown, Chen said Foley Square is one of seven “portals” into the neighborhood.

Originally planned for a site near the Kimlau War Memorial monument in Chatham Square, the sculpture drew protests from some Chinatown residents who complained it would be disrespectful to the memory of the Chinese-American soldiers honored by the memorial.  Chen vehemently denied the claim, but another site had to be found and this one offers one bonus, he said. “It’s right opposite the marriage bureau, so it provides a background for photo ops.” 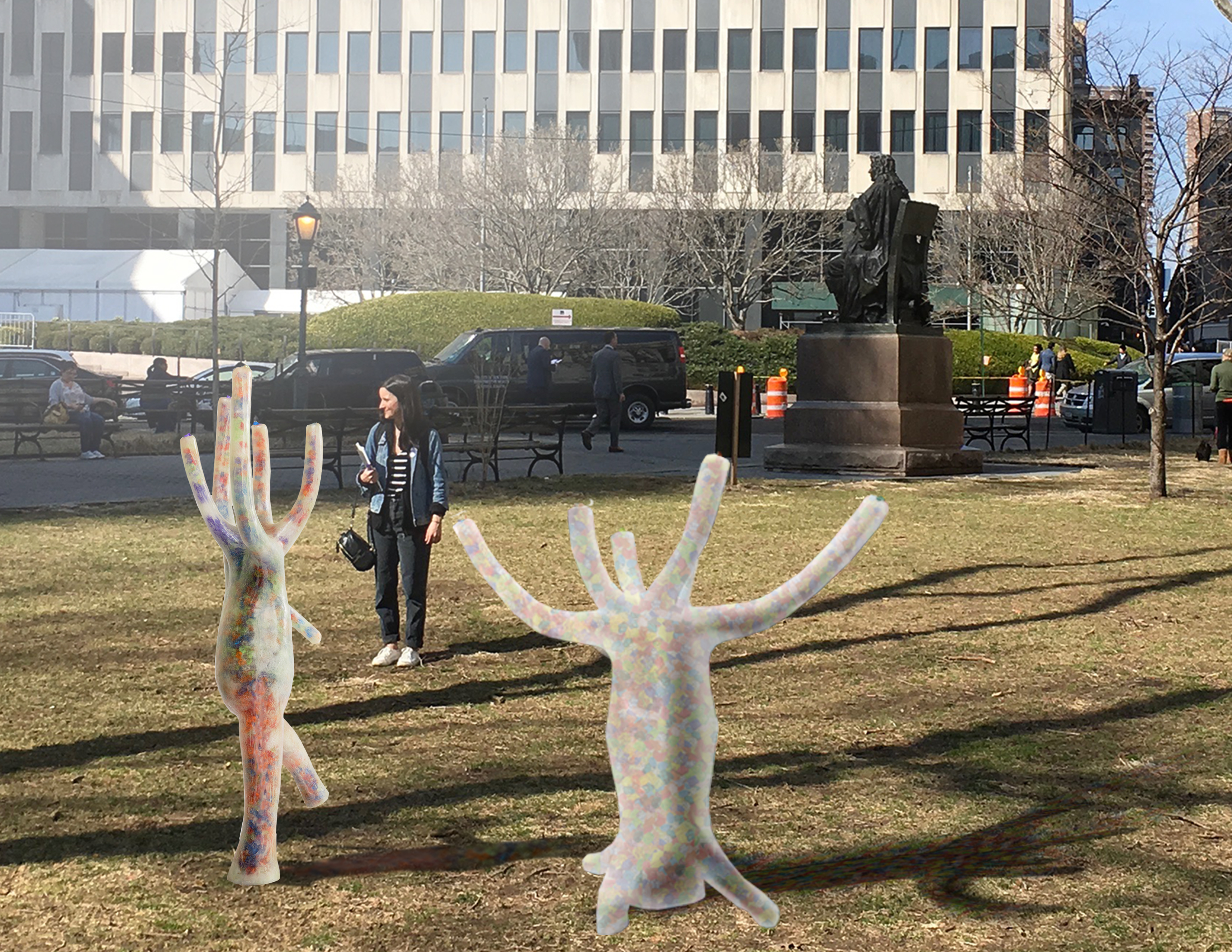 Rendering of two of Judith Modrak’s filled and sealed “Our Memories” sculptures in Thomas Paine Park. The seven sculptures will be grouped in three locations in the park. Photo: Judith Modrak (rendering)

In nearby Thomas Paine Park, at Lafayette and Worth Streets, Judith Modrak will be collecting Our Memories, as she calls her project. The artist asks participants to choose among six colored acrylic stones, a different color for a different emotion—joy, anger, love, sadness, fear and surprise—that is tied to a strong memory. Those “memories” are dropped into a translucent, fiberglass vessel of Modrak’s design and, when filled, is permanently sealed. During the opening of “Our Memories,” on May 4, from 10 a.m. to 2 p.m., people will have a chance to add their memories, and color, to one of the vessels. She calls the project a collective memorial “that connects us to our core and to one another.”

“As the sculptures collect more and more memories, they come alive,” Modrak said. “So you’re really seeing them transformed.”

“You’re recalling your own personal memory but you’re also creating a new physiological memory in your brain,” the artist added.

There will be seven sculptures in the park, only one of them open for new memories. The others will have either been filled during a 2016 installation on Governors Island or an upcoming event on April 20 at the Naumburg Bandshell in Central Park. The sculptures will be installed at the beginning of May and remain there for a year.