The exhibition is introducing 3 new artists to the gallery. Each artist brings to the gallery their new perspective of their artistic view, technique, and talent.

Ms. Borgenicht deftly combines classical and contemporary technique to create an interactive dialogue of vivid realism and softer interpretive renderings.  Her still life paintings evoke a sense of history and travel and are infused with a rich palate of brilliant color and texture.  Lois works in oil paint but also enjoys the immediacy and brilliance that only dry pastels can offer.  Whether working with a nude, an artful still life, a landscape, or another, Lois combines movement, technique, and texture to infuse her works with a vital presence.

Celine’s works in encaustic on wood panel to create a range of abstractions and representational imagery.  Bee’s wax and pigments combine in this ancient medium and lend themselves to easy layering and infinite texturing through the use of brushes, palate knives, and heat.  Some are richly textured, some incorporate multimedia collage, and others have smooth glossy surfaces. The final result is a painting that engages the viewer and challenges them to look beneath the multiple, semitransparent layers.

Painting is a personal process for Celine. The unplanned selection of color, brush strokes, collage, and scoring enable her to allow the painting to unfold in a fluid, organic manner until it culminates in a finished poise. This technique allows her to experiment with the voice of the painting through discovery.

Judith explores the intricacies and fragilities of human nature through figurative and organic forms. Her work seeks to illuminate the human condition.  Using transformative events from the public sphere, she taps into public sentiment as a springboard for exploration of the psyche. Sculpture is a way for her to transform complex scenarios of conflict and vulnerability into something tangible.  Often haunting and deeply personal, her figures demand attention from the viewer with their vulnerability and pathos.

Judith’s chosen medium, plaster cast, is an extension of her ethos for its combination of inner strength and external fragility.  In her limited edition series, each cast is hand-painted and no two are identical and stand shoulder to shoulder with her one-of-a-kind creations of human, animal, and organic sculpture.

The exhibit will be on view until November 17th.

The exhibition is part of the Englewood Fall Gallery Walk.

Gallery hours are Tuesday through Saturday 10 am – 6 pm. 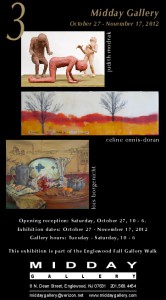 New York, NY (October 17, 2012) – Judith Modrak, a Union Square sculptor, was the winner of the combined N.A.W.A Medal of Honor and the Margo Liebes Harris Memorial Award for her sculpture entitled “I’m Here!”.  It was announced on September 21, 2012 in New York City by the 123rd Annual N.A.W.A. Exhibition President, Doreen Valenza.  A three member team juried over the nationwide contest.

“I am very honored by this recognition and am grateful to N.A.W.A. for the opportunity to exhibit,” says Modrak.   “It’s a bit of an ironic story as “I’m Here!” is expectantly waiting for something to happen, afraid that she may be overlooked either due to her physical size or indifference.  Little did she know what was in store for her.”

“Art is so important for our world,” Modrak says.  “Like singers who need listeners, artists need viewers.  With mutual exchange, we share and explore our broad range of emotions and feelings through visual artistic expressions that capture the joys and frailties of human life.”

“I’m Here!” is a pigmented plaster cast and is part of Modrak’s larger “Standing Series”.

Founded in 1889, N.A.W.A. is based in New York City.  The organization supports and promotes female artists through exhibitions, events and lectures.

Judith is a figurative sculptor who delves into interior landscapes of conflict, anxiety and vulnerability. The painted figures, derived from human and natural forms, reflect archetypes rather than portraits of specific individuals or arranged still lifes.  She investigates areas of our experience that surface during unguarded moments—focusing on feelings of disappointment, loss and insecurity.  Whether plaster cast, bronze or resin, the pigmented surfaces are finished with various patinas, including oil, wax and shellac.

Modrak earned her BFA from the San Francisco Art Institute and currently works from her Union Square studio in New York City.  For more information and upcoming exhibits, please visit her website www.judithmodrak.com or Facebook.com/judithmodrak.

The juried exhibit “From a Different Point of View,” which opened last month at Point Park University’ Lawrence Hall in honor of the 25th anniversary of Women’s History Month, features 21 varied, ye texcellent, contemporary works of art from 15 female artists from across the country.

“There was never anything like this in Pittsburgh,” says the exhibit’s organizer John Tomayko, a Pittsburgh art collector and member of the Point Park University board of trustees, who organized the exhibit.

“We’ve had a good first run, so we’re going to do it every two years,” says Tomayko, who also provided the funding for the prizes and the purchase award.

Eric Shiner, director of the Andy Warhol Museum, was the juror for the exhibit. The participants were pulled from more than 200 entries received by members of the National Association of Women Artists.Based in New York City, the association has more than 700 members in the United States. So, it is a given that this show is a varied one. But, even so, all of the works are of the highest caliber.

Take, for example, the installation piece “Preserving Traditions,” which garnered Caroline Rust of Rock Hill, S.C., a first-prize award of $1,000.

Exploring make-up as a particular aspect of femininity, Rust’s installation, which combines tubes of lipstick with larger than life paintings of women’s lips, speaks volumes about the ritual of womenwearing lipstick, purposely coloring their lips and employing their lips for expression. “When we areyoung, playing with cosmetics is one thing, but as we grow up and mature, it becomes another,” Rustsays.

Rust says her inspiration for the piece was drawn from childhood memories of playing with hergrandmother’s lipsticks. “I can still recall their waxy scent,” she says.

Pennie Brantley of Petersburgh, N.Y., frequently uses imagery from her travels. However, Brantleysays, “I hope that viewers find the emotional and psychological spirit within the paintings to be ofuniversal connections.”

Her painting, “Stopped Train From a Moving Train (Amsterdam to Brussels in Memory of My Father)” isespecially personal. That’s because the source image is taken from a quick snapshot Brantley took whileon a train that was slowly passing another on the tracks in Haarlem, the Netherlands, where she hadtraveled with her husband in 2005 to meet a woman she had only heard about.

“The trip was a step back in time to meet my father’s first love from World War II in Belgium,” shesays. “I had been aware most of my life that Denise was very important to my dad, although he neverspoke of her out of respect and love for my mother.”

Years after her father’s death, Brantley’s mother suggested that she find Denise on a planned trip to theBenelux countries. “Thanks to the Internet and newfound friends, I did,” she says. “Denise was thrilled,and told me she never stopped loving him, although she is happily married to a wonderful man. Theyinvited us to come to their home and offered to take us to the chateau where my dad lived with theother soldiers.”

The bright red train in the painting is painted in a soft glow, giving the final touch to evoking a feeling ofmisty memories, both personal and universal.

Sculptor Judith Modrak of New York City is another artist included in the show who uses events and emotions as a springboard for exploration. For Modrak, sculpture is a way for her to transform complex scenarios of conflict and vulnerability into something tangible. “My primary medium, plaster cast,conveys both a strength and a fragility that is important to me,” she says.

Modrak’s piece “One Step Forward” is one of five haunting figural works from her “Standing” series that delves into the notion of in-between states, emotionally and physically. ” ‘One Step Forward’ is about capturing the fierce determination laced with uncertainty involved in taking a step into unchartered territory,” she says. “(The figure) also expresses a hint of anger at the possibility that she will not succeed.”

The blue figure, which has unusual eyes that have literally stopped visitors in their tracks, is poised in a forward moving gesture, as if walking. In this way, Modrak says it invokes notions of “crossing landscape, both internal, as in changing an unsatisfactory aspect of one’s life, and external, as in hecourage to stand-up for one’s principles in the face of opposition.”

Either way, it’s a real stand-out piece amongst the remaining works on display, many of which beg to be seen in person to be appreciated.

‘From a Different Point of View’
What: An art exhibit by members of the National Association of Women Artists.
When: Through May 19. 8 a.m.-9 p.m. Mondays-Thursdays; 8 a.m.-6 p.m. Fridays-Saturdays
Where: Point Park University’s Lawrence Hall, at the corner of Wood Street and the Boulevard of theAllies, Downtown
Details: 412-392-8008