Is SciArt the new Outsider Art? While these two movements may at first glance seem dissimilar – one is of the self-taught, and one is rooted in science – they have more in common than immediately meets the eye. I would even venture that they are close kin, if not siblings. Portrait of William Frosch (1993 by Steve Miller). 40” x 61”. Pigment dispersion and silkscreen on canvas. Image courtesy of the artist.

SciArtists come from all walks of life – from the formally trained, to scientists turned artists, to outliers of both disciplines. What unites this diverse group of practitioners is an unflinching passion for all things organic (people, plants, animals – the universe in total), and a seeming disregard for the norms and vicissitudes of the conventional art world. Their work is typically driven by a specific curiosity and obsessive dedication to particular phenomena, as opposed to a larger “art world” aesthetic or trend of the moment. Norman Giradot, comparative religion scholar with a strong interest in outsider art as it relates to religion and other areas, shared the following observations with me – observations I would like to assert apply with equal measure to SciArtists:

“Without attempting any kind of comprehensive inventory of the ever-shifting and often warring nomenclature (triggered by the work of the French maverick “non-cultural” artist and theoretician of Outside Art/Raw Art Jean Dubuffet in the 1940s), it is worth mentioning some of these unwieldy designations: folk, naïve, brut, primitive, self-taught, vernacular, intuitive, traditional, anti-cultural, marginal, contemporary folk, popular, grassroots, mentally ill, psychotic, and so on. These are all terms that have to do with anything non-mainstream – that is, outside the usual or “normal” parameters of elite, urban, academic (“schooled”), or official cultural institutions.”

[Outside Art] is intuitive, not conceptual. Straight from the hand, heart, and gut; not just from the head. Strange, not normal. Sometimes crude; sometimes amazing. It can also be said that there is often a psychologically traumatic, or even visionary event that causes a culturally isolated person to discover their unexpected destiny as an artist compulsively compelled to communicate visual messages concerning the hidden, strange, or secret nature of the human condition. These messages frequently have an eccentric religious, political-social, or sexual messages. There are also a number of important outsider artists who communicate “scientific” visions about a fantastic, fringe, or spiritualistic sense of physical reality. Examples of these artistic visionaries of a strange, esoteric, or cosmic science include UFO artists like Charles Dellschau and Ionel Talpazan, A. G. Rizzoli’s symbolic architecture, and Paul Laffoley’s coded scientific diagrams.” “Familial Memory and Family of Memories” (2016) by Judith Modrak. Investigating the nature of memory formation and family dynamics from a neuron’s perspective. 44″x28″x30″, plaster cast and oil; 37”x36”x24”, plaster cast, pigment and oil on plaster base. Image courtesy of the artist.

While not entirely overlapping, the similarities between the two groups are striking, and the phrase “strange, not normal” could be considered the rallying cry of all SciArtists. We are driven by an internal fascination – whether of neurons, algae, bacteria, the Anthropocene, chemical erosion, or even modalities of communication – we are propelled by our excitement and seek to share this vision with others. Yet in the same way Post-Impressionists such as Van Gogh and Seurat followed in the footsteps of the Impressionists Manet and Monet, SciArtists follow in the imprints created by Dubuffet and traditional Outsider Art artists like Finster, Evans, and Traylor. I would even venture to posit that the spiritual mother of Outsider Art is Yayoi Kusama.  While embraced by the larger art establishment and culture, Kusama’s visceral, organic, and obsessive creations reflect the larger ethos of Outsider Art and certainly serve as personal inspiration within my own work. Other artists from the past century whose influence pulsates though the SciArt community would include Bourgeois, Ernst, Klee, Giacometti, Pfaff, von Rydingsvard, and Anatsui, among others. With more SciArt-based programs within traditional art schools and universities, including STEAM, a new crop of SciArtists is being cultivated. As a result of these programs in conjunction with the heightened visibility of SciArt organizations, such as SciArt Center and ASCI, and exhibitions devoted to art inspired by science, what was a loose collective of trained and untrained artists and scientists is coming into its own as a discipline. As SciArt shakes off the stigma of being a scruffy hillbilly relation to its swanky, mainstream postmodern relatives, it will occupy a new and most probably visionary place in the art world. During this transformative period, it’s fittingly ironic to rename this passionate band of outsiders as the ultimate insiders – the New Outsider Art – strange, raw, and electrifying. New York sculptor Judith Modrak is fascinated with scientific advances that increase our understanding of the mechanisms that trigger and regulate thought, action, memory and feelings. Her subjects – the origin of instincts, the location of memories and the cellular anatomy of the brain – are esoteric and often intangible concepts that she seeks to translate in 3-dimensional, painted sculptural form. Modrak’s work has been exhibited in solo and group shows in galleries, museums and fairs throughout the United States including Los Angeles Contemporary Exhibitions, the Trenton Art Museum, Point Park University, the Palm Beach Art Armory, the Woodstock Museum, the Hartnett Gallery, Art Context NY, and Governors Island NY. She has received a chashama/National Endowment for the Arts grant and two gold medals in sculpture from the National Association of Women Artists, among other awards, and is represented in many private collections. Her work has been featured and reviewed in literary, scientific and news publications, including The Seaside Times, The Gothamist, SciArt, Sculpture Magazine, Interalia and The Pittsburgh-Tribune.

The evening will open with Julia Buntaine, Director of SciArt Center, setting the backdrop of how the apparently opposite fields of art and science have begun to merge in the recent years. While science aims to deliver accurate information about the world, art can inspire and present scientific concepts to a broader audience. The introduction will be followed by a panel discussion on SciArt, moderated by artist and WIB member, Yana Zorina.
The panel of artists will include: 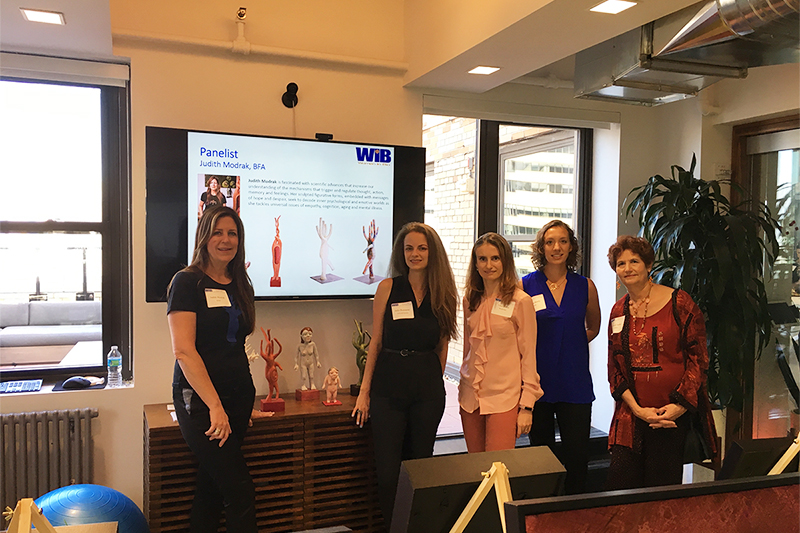 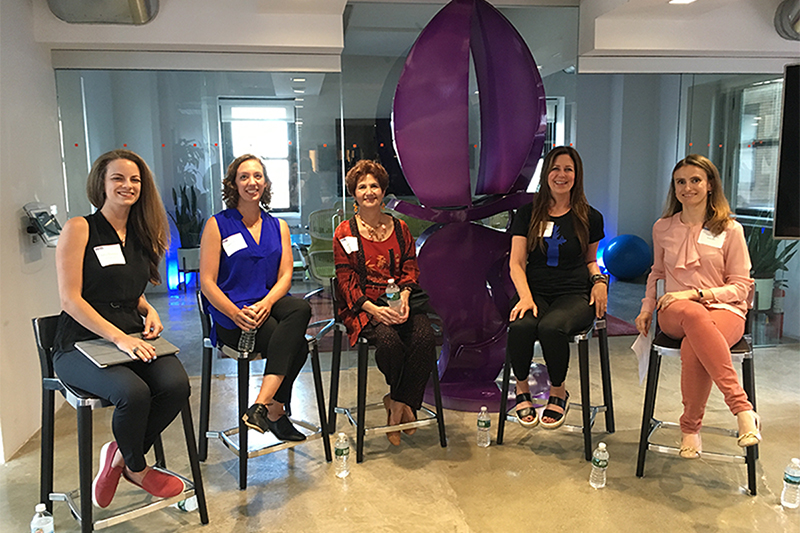 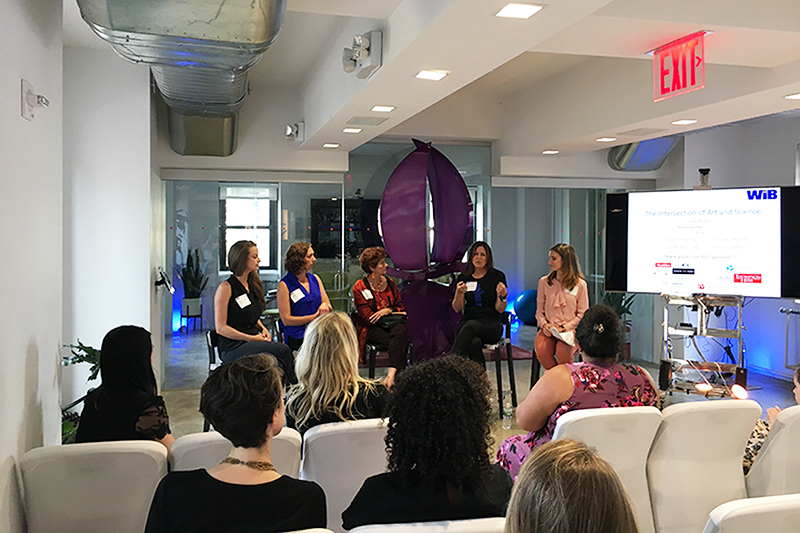 “Memories Recorded, Memories Stored” is a documentary that weaves the lives and memories of the people into a unique, transformative work of art and chronicles the creation of “Our Memories“ on Governors Island. On July 15th, it was named “Best Documentary Short for Science and Education 2017” at the 6th Annual Madrid International Film Festival. 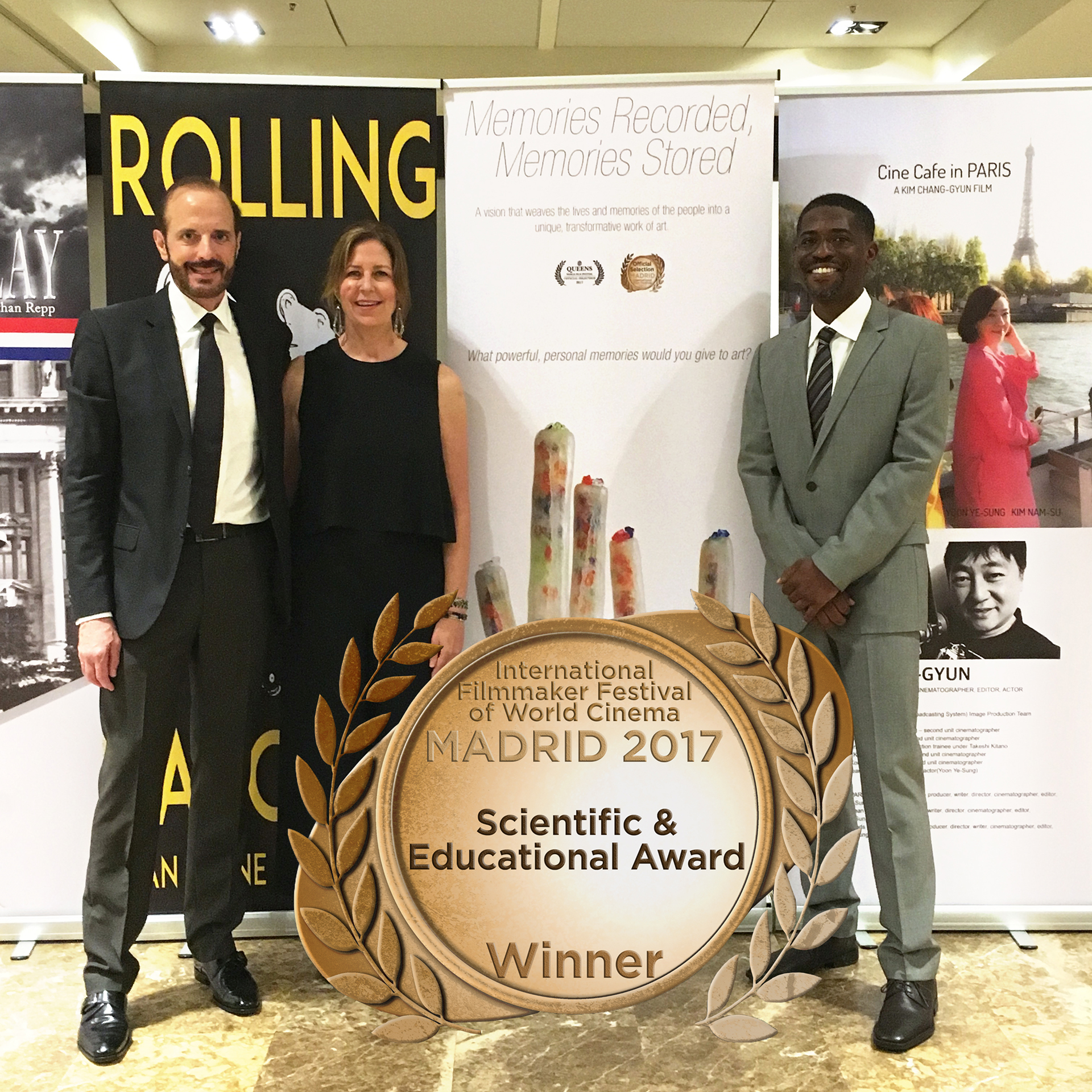 THE ARTIST AT THE CENTER OF THE FILM

The film follows sculptor Judith Modrak as she creates her first interactive art installation, Our Memories, on New York’s Governors Island. Modrak invites the public to complete the sculpture, sharing memories, represented by colored stones, to create a unique, transformative work of art. 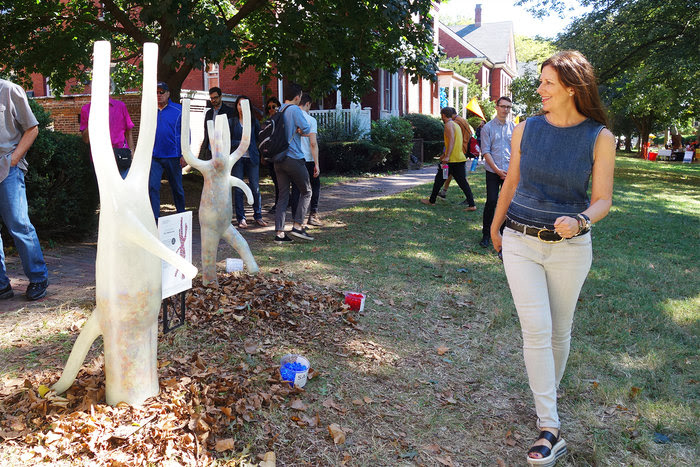 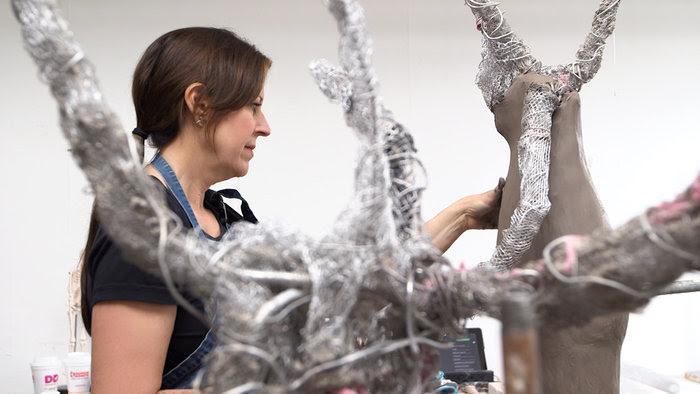 “The public really seemed to enjoy participating in the sculptural installation and creating a collective memorial piece,” Modrak says, “and now it looks like the audience appreciates the film as well. It’s been an electrifying experience all around!”

This is the fourth short film for director Jake Alexander McAfee, and his first documentary. McAfee’s previous films include “The Commute” for Goodwill Industries in 2014, and “2nd Life,” which won the HBO Best Short Film Award for 2015, and qualified for Academy Award Consideration for Best Live Action Short Film. “2nd Life” caught the attention of Academy Award-winning director Ron Howard, who is now a mentor to Jake and his blossoming career.  “My vision for the film was to highlight Judith’s style and artistic aesthetic.” McAfee says,”more importantly, I wanted to capture Judith’s drive and spirit as an artist, and her journey to create Our Memories. At the same time I wanted the film to reflect the impact the sculptures had on the public,” says McAfee,” its effect on them, both their interaction with and reaction to the work.” 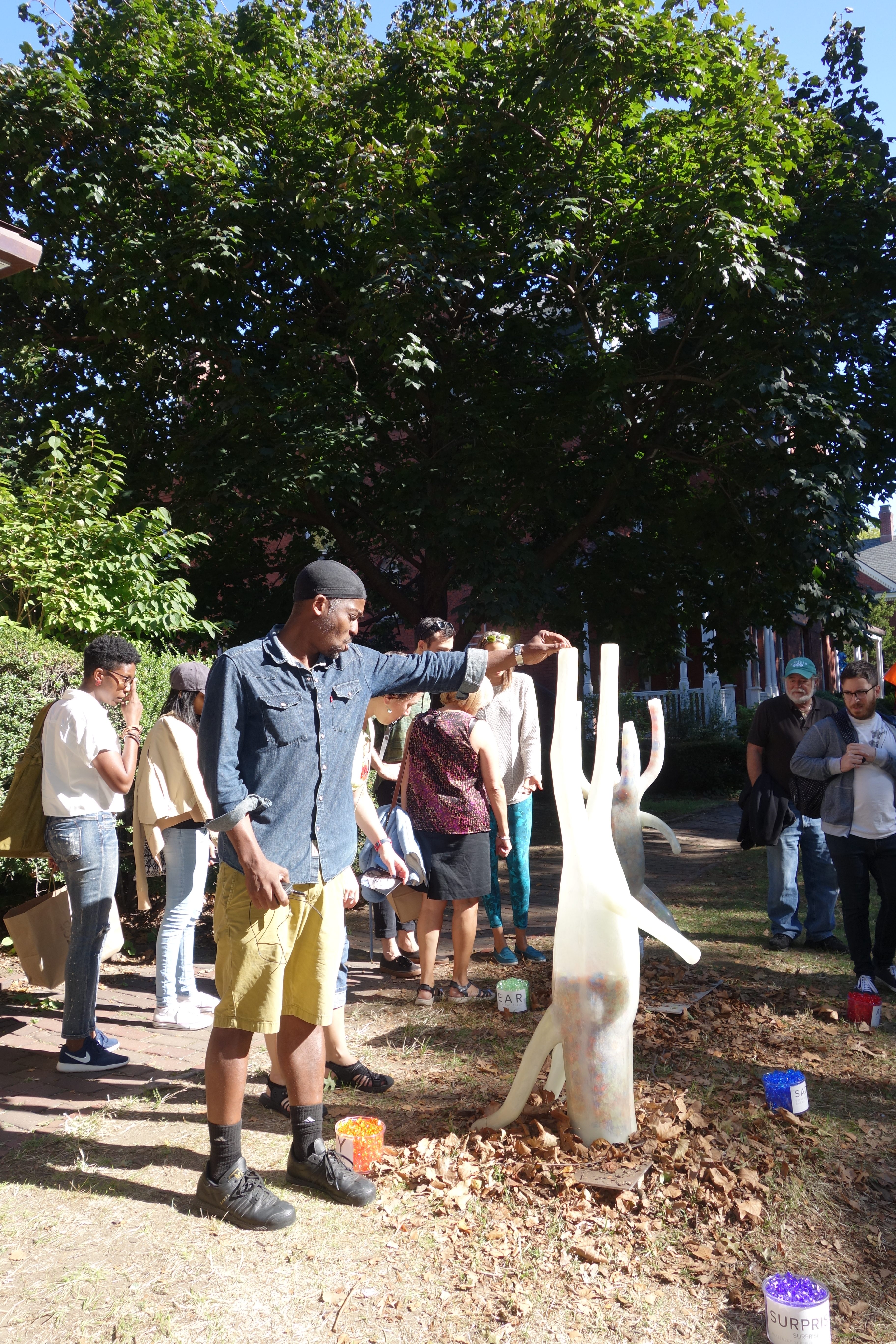 After many successful years as a Vice President of technology firms, Mark Lobene is now a full-time actor, producer and founder of Gramercy Empire Productions LLC. He met McAfee while co-starring in “2nd Life.” “Working with Jake once again was a real pleasure. I knew his sensitivity and strong narrative sense would come through on this project. We were honored in Madrid and we’re very thankful for this vote of confidence in our story.” Lobene says,”making this documentary fulfilled a long-held desire of mine. We were able to capture the creation of a sculptor’s work and capture the audience reaction and appreciation in one film. This, to me, was a complete feedback loop of the artistic process. ” 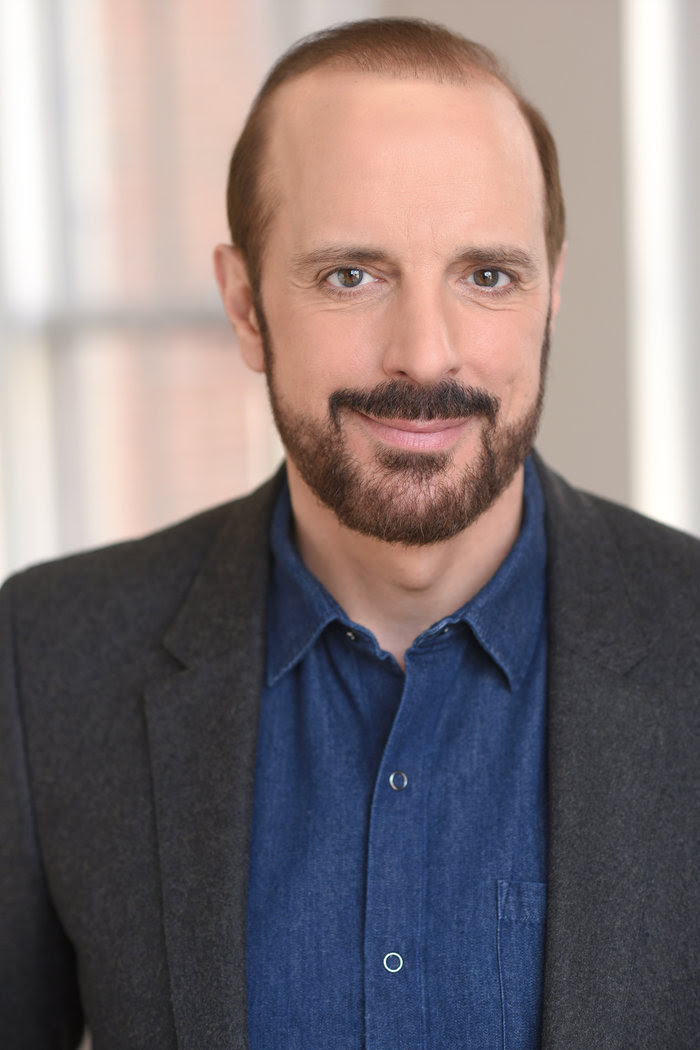 “Often we see the completed work in a gallery, or we see it being created, but rarely do we see the start to finish which, in my opinion, should always include the viewer’s interaction. Having sculpture that was designed to be interactive, made this story that much more compelling.” The film was screened earlier this year closer to home, at the Queens World Film Festival, and has now won an award in Madrid. “We appreciate the recognition from the Madrid International Film Festival, “Lobene says, “and we hope to continue showing this documentary around the world and we appreciate all the interest in it.” 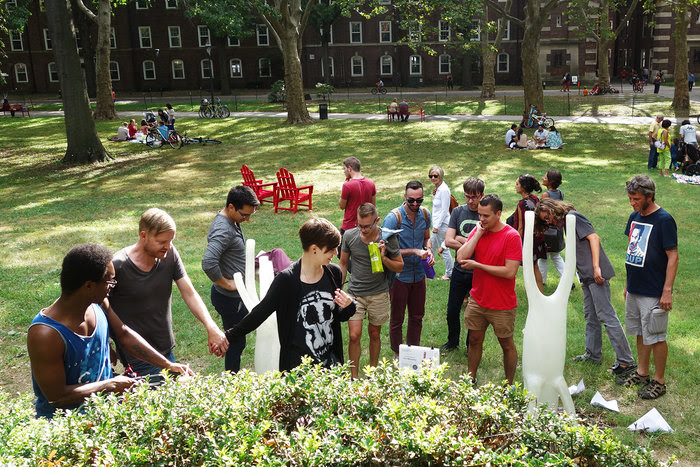 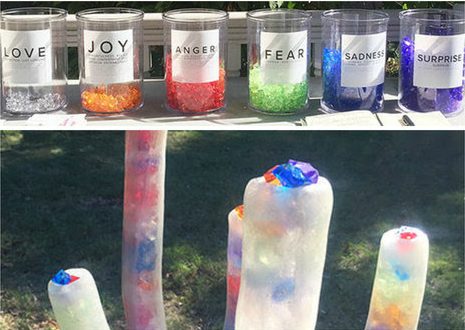