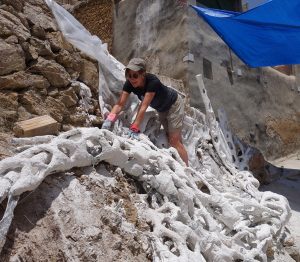 The forms and concepts in Judith Modrak’s work often bridge art and science by exploring discoveries that increase our understanding of psychological and physiological landscapes. She is fascinated by what goes inside – from the composition of brain cells to the intricacies of emotional vulnerability to the way memories are formed and stored. Her non-interactive sculptures and participatory installations manifest different aspects of our internal makeup, highlighting the reciprocity between inner impressions and the external world. These two sides, taken together, unmask how our personal and collective experiences develop and evolve in the context of the larger environment.

Modrak’s work has been exhibited in solo and group shows in galleries and museums throughout the United States and Europe, including Los Angeles Contemporary Exhibitions, the Trenton Art Museum, Point Park University, the Palm Beach Art Armory, the Woodstock Museum, the Hartnett Gallery and the New Arts Center. Our Memories, a public artwork of seven sculptures, has been installed on Governors Island, Central Park, and in Thomas Paine Park in New York City. Recent honors include a 2019 Lower Manhattan Cultural Council and NYC Department of Cultural Affairs Creative Engagement Grant and a public artwork in Murcia, Spain. The documentary Memories Recorded, Memories Stored, about Modrak’s project Our Memories won Best Science and Education Documentary at the Madrid International Film Festival in 2017 and Best Short Documentary at the Amsterdam International Film Festival in 2018.

Her work has been featured and reviewed in various art, science, and news publications, including Curbed NYC, BCTV, Tribeca Trib, Scientific American, The Seaside Times, The Rochester Review, SciArt Magazine and The Pittsburgh-Tribune. Modrak exhibits with a number of non-profits and galleries in the tri-state area and her work is in private collections throughout the United States and Europe.