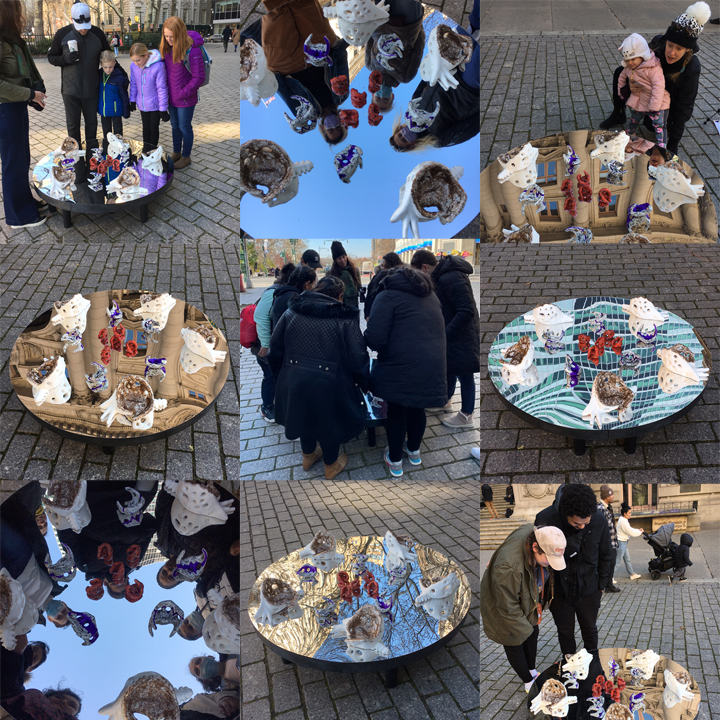 “Endangered Fossils” seeks to engage the public in considering the origins our ecosystem and our symbiotic role and relationship to that environment in light of disastrous climate change which is causing many species to tragically become extinct. Fossils are even “endangered” as certain species may not leave a trace that they ever existed. The “Endangered Fossils” project is a homage to our beloved Mother Earth in a critical time requiring immediate attention.

The “Endangered Fossils” event in Bowling Green will symbolically occur on one of the days honoring wildlife conservation, December 4th, in Manhattan’s oldest public park and former council grounds for Native American tribes. Wildlife Conservation Day seeks to spread awareness about preserving and protecting the natural world and its inhabitants. The observance strives to put an end to wildlife crime and supporting the Endangered Species Act.

This project is made possible in part with public funds from Creative Engagement, supported by the New York City Department of Cultural Affairs in partnership with the City Council and administered by LMCC.

“Endangered Fossils” are also on display in Flushing Meadows Corona Park through May 2022 as part of the NYC Parks’ Art in the Parks Program. For over 50 years, NYC Parks’ Art in the Parks Program has brought contemporary public artworks to the city’s parks, making New York City one of the world’s largest open-air galleries. The agency has consistently fostered the creation and installation of temporary public art in parks throughout the five boroughs. Since 1967, NYC Parks has collaborated with arts organizations and artists to produce over 2,000 public artworks by 1,300 notable and emerging artists in over 200 parks. For more information about the Art in the Parks Program, please visit www.nyc.gov/parks/art.