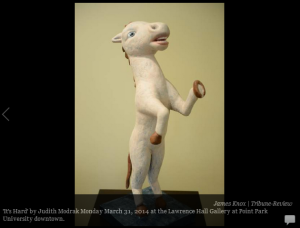 In celebration of the 125th anniversary of the founding of the National Association of Women Artists, Point Park University has mounted a juried exhibition of works by the group’s members titled “Visions and Revelations.”

Featuring 26 varied, yet well-executed, works of art from 16 female artists from across the country, it is the second of what has become a biennial exhibit in honor of Women’s History Month, which was February. It will remain on display in Point Park University’s Lawrence Hall Gallery through May 18.

Sarah Hall, director of curatorial affairs at Frick Art & Historical Center, was the juror for the exhibition, which was organized by Pittsburgh art collector and health care entrepreneur John Tomayko, a member of the Point Park University board of trustees who also provided the funding for the prizes and the purchase award.

The participants were pulled from more than 200 entries from members of the National Association of Women Artists. Based in New York City, the association has more than 700 members from across the United States. So, it is a given that this show is a varied one, with works in a multitude of media ranging from the 2-D variety, as in painting and photography, to the 3-D, as in sculpture and fiber art.

As in the previous women artists’ association exhibit at Point Park, there are plenty of paintings on display, and they are all interesting, each in their own way. Take, for example, the painting “Owl, Death of My Past,” which, even in its purposely unfinished state, garnered New Mexican artist Claudia Kleefeld a first-prize award of $1,000.

Including a black cat with a butterfly in its paws, a baby owl and an “old European family” with a baby in a carriage, the painting is based on a dream, Kleefeld says. “In my dream, I looked out my bedroom window at the scene behind my room in the garden. This painting shows the view from my bedroom, which is the same as it was in my dream.

“In the coming month, beside this bedroom window, an owl came to visit,” she says. “I thought this painting was a start to something and called it ‘Owl, Death of My Past’. This lineup of people and animals became later relevant to the life I was about to step into.”

That life included marriage and the birth of her daughter, making this piece all the more personal. And yet, in its unfinished state, the piece leaves lots of room for one to complete his or her own story.

Other works on display are just as personal. “Escape,” a painting of clouds by Michelle Manley of Austin, Texas, also has a story behind it.

“While anxiously traveling through very heavy rain, I happened to look upward through my windshield to observe a sudden and momentary shift,” she says. “The rain ceased, and the clouds directly overhead parted just enough to reveal a small patch of blue sky. The clouds soon reconnected and the rain continued, but I was still intrigued by the visual contrast and, more so, by the opposing moods of the occurrence.”

Some of the artists display more than one piece in the exhibit, such as Judith Modrak, a figurative sculptor based in New York City, who displays a female nude figure, “I’m Here,” next to a horse figure, titled “It’s Hard.”

“It’s Hard” is a flesh-toned sculpture of a horse with human proportions and characteristics that is self-consciously standing on its hind legs in what is, in fact, an impossible pose. Modrak explains: “The title expresses feelings of determination depicted by the physically difficult pose taken by the horse and the tension in trying to maintain it.”

Modrak, who began riding horses at age 5, identifies with the iconic image of the horse on a personal and symbolic level. “As an archetype, the horse represents our instinctive, primal drives — the essential source of one’s creativity,” she says.

Both sculptures are part of the series “Ruminations,” which Modrak describes as “a cycle of meditations involving sensations, beginnings and perseverance.”

Also displaying more than one piece, Pennie Brantley, who lives in the Taconic Mountains of New York, displays three works, all landscape paintings based on her travels.

“Passageway (Paraza, France)” is a real standout, both in the show and for the artist. Brantley says it is an unusual painting for her because it was painted in the town of Canal du Midi in the Languedoc-Roussillon region of France, which hosts an annual global artists’ symposium. Brantley was one of a group of international artists invited to paint this particular spot as a special project.

“The curator was curious to see how each one would interpret it in our varying styles and media,” Brantley says. “That idea connects with my own motivations of using powerful imagery to represent universal psychological states that humans share, regardless of artificial boundaries.”

Though there are nine states represented among the 16 artists whose works are on display, there is one local artist included, and that’s Elizabeth Myers Castonguay of Mt. Washington.

Titled “Girl With the Spatula-tailed Hummingbird (Endangered Body of Work),” her painting is part of a body of oil paintings that are a tribute to the more than 10,500 endangered species on our planet.

In this work, as in all of those paintings, the human figures are generally monochromatic, Castonguay says, “to show the universality of this problem and our need for global solutions.”

“The figures are mostly undraped, so they are not limited to a particular culture or era,” she says. “The animals are always in their full, rich color to show the value of these vulnerable members of the Earth’s community. For too long, the importance of these creatures has been underestimated by humanity.”

The remaining works on display are just as compelling, each for unique reasons, making for a wonderful exhibit well worth seeking out.