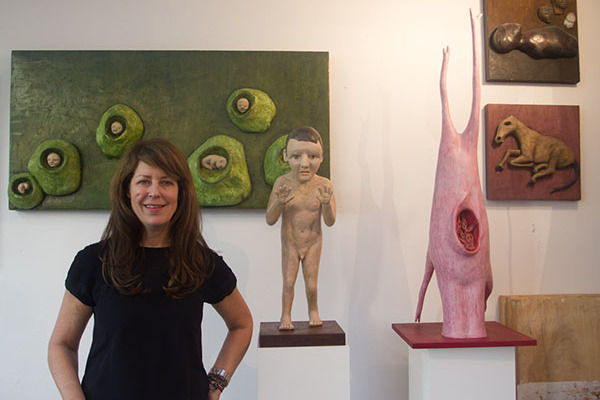 Judith Modrak’s “Standing” sculpture series is a set of plaster-cast ambiguous human figures in various shapes and sizes and colors. Although simple, they are very emotive. They represent the anxiety, anger and fear one has stepping into uncertain territory. Their ambiguity allows viewers to connect with them.

Everyone has felt unsure about a life change, including Modrak herself, who was about to leave her interactive technology career to become a full-time artist in New York City. She created “Standing” to illustrate this risk-taking.

She used her uncertainty, anxiety, fear and anger as inspiration for the series. These negative feelings created a successful series and helped Modrak carry out her dreams of being an artist.

Within three years, Modrak won such art awards as the National Association of Women Artists 123rd Medal of Honor and the Margo Liebes Harris Memorial Award for Sculpture. She was showing her work at chasama art gallery in Harlem. The artist who never lost sight of her dreams found that hard work and perseverance pays off.

Modrak always wanted to make art but she didn’t get to commit fully to her passion right away. It wasn’t until three years ago when she was in her 40s, that she took the plunge. She had been working at Condé Nast but realized she wanted more than just weeknights and weekends for her art. It would mean giving up a lucrative job and risking financial challenges.

Modrak felt anxious that her dream might not work out. But in addition to creating the “Standing” series she also joined the National Association of Women Artists to give herself opportunities for shows and for the support network.

The four figures in “Standing” are vulnerable looking, mirroring Modrak in her career transition. Though simple, they are built on pure emotions with telling titles. The first statue of the series, “One Step Forward,” illustrates the artist’s determined steps into uncharted territory as full-time artist. The nude, gray-blue figure takes a tentative step forward with an expression of strength and stiff hands full of intent. There is anger in the figure’s face, showing how the artist would be furious if her venture wasn’t successful.  The statue won second place in a show juried by Eric Shiner, director of the Andy Warhol Museum.

Modrak felt angry thinking of the possibility of failure because art was all she ever wanted to do when she was young. “I remember there was enormous gratification in the act of creation and in the materials, the entire process of being expressive and creative,” says Modrak. “All of that was from a very early age.”

Modrak moved a lot when she was growing up, yet always kept art in her mind. After her parents separated when she was 7, she and her brother and her mother moved from city to city, as her mother went from college to career as a professor of Ancient Greek Philosophy. They finally settled in Southern California, where Modrak studied art at the University of California, Riverside, for two years before  transferring to the University of Rochester in upstate New York to finish her B.A. She went on to get a B.F.A. at the San Francisco Institute of Art and spent four years in San Francisco after graduating before landing in New York City, where she’s been for almost 20 years.

The next figure in “Standing,”  “Standing By,” captured the attention of Midday Gallery owner- director-artist Anat Klebanov.

“From that one sculpture I knew that I wanted to pursue Judith as an artist,” she says.

Klebanov says she usually is drawn to the visual impact rather than the story behind an artwork but she wanted to know more about “Standing By.” The nude female has shoulder-length brown hair painted with a peach skin color patina. Her expression is full of anxiety, waiting for what’s going to happen next. Her hands are turned outward as if she’s reaching for something. Klebanov says that the piece is a conversation starter at the gallery. Visitors study the figure, wanting to know what she’s thinking.

Klebanov’s New Jersey gallery rarely takes on new artists but made an exception for Modrak. She first spotted Modrak’s work at a National Association of Women Artists show at Midday Gallery in May 2012.

“She has a very good concept of the art,” Klebanov says of Modrak. “She’s definitely investing and pursuing things behind the art.”

Fresh out of college, Modrak had trouble attracting gallery attention as easily as she did with Midday later on in her life. She tried to make it as an artist but had to do temp work to make ends meet. Her focus remained on her art and led to a few major successes, including selling her work to major San Francisco area art collector Rene di Rosa.

“I had talked to a lot of galleries and had a lot of interest but I didn’t have whatever that major catalyst is that’s enough to generate an income,” says Modrak.   As she struggled trying to make it as an artist, Modrak found herself in her 30s at a crossroads in her career path.

“I could continue down the path of many of my artist friends who were living in squats and were marginally getting by, or I could decide that I would need to make a living in another way. It was never a question of what I’d rather do, I would obviously rather sculpt all day,” says Modrak. “It was a pragmatic choice to explore another career that would afford me an income, stability and also allow me to create a structure where I would be able to practice art.”

She decided to take up something she liked that wasn’t art: human and computer interaction and website development. Modrak became a successful web-based consultant, advising huge corporate clients and leading large teams of engineers and web designers for 15 years. However, art was never out of her mind, and on weekends, she reserved studio time to completely immerse herself in her work.

The next figure in the series is “I’m Here!” — which is similar in design to “Standing By.”  This statue is also a female figure with shoulder-length brown hair. She still looks anxious but exudes determination. The figure tells a story of someone who is ready to complete a task regardless of how it will turn out. Modrak created 10 limited-edition figures of “I’m Here!” including some with a photo emulsion technique with which she’s been experimenting. Modrak was worried about the small size of “I’m Here!” — which measures 13”x6.5”x3” — but the work wasn’t overlooked. “I”m Here!” won the National Association of Women Artists 123rd Medal of Honor and Margo Liebes Harris Memorial Award for Sculpture in 2012.

“Barely Standing” continued Modrak’s exploration of doubt. This ageless male figure steps forward, his arms held out aggressively. His hands are small and offer him little support, which suggests vulnerability.  His expression is aggressive, determined, maybe a bit scared and defensive. Modrak was awarded a second NAWA award for sculpture for “Barely Standing.”

Modrak’s latest addition to “Standing” is “I’m Still Here,” a ghostly older manifestation of “I’m Here!” She has the same brown hair and similar anxious expression as her younger version but this figure expresses maturation. Modrak says the subject isn’t age specific but is older than “I’m Here!” and she has strong hands.

“She’s ready for what she needs to do,” says the artist.

Modrak’s other work includes the series “Dendrites” and “Things Change.”Like most of her work, they explore interior landscapes, both physical and emotional.

Her risk-taking has paid off in other ways, too. She has participated in 25 shows.  Her most recent solo show, “Imprints,” was at chashama Gallery. Chashama also provided Modrak with a grant.

“All these amazing things! And it’s just starting!”says Modrak excitedly. Now she’s developing a new series called “Fitting In” in which she plans to continue trying photo emulsion.

Like her new series, her dream of an art career is fitting into place.