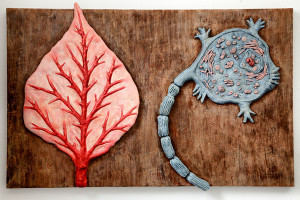 The year was 1974. A 12-year-old girl in Demarest, New Jersey was trekking through the woods near her school with the rest of her 7th grade biology class. The teacher, a charismatic and folksy gray-haired gentleman, was helping the class identify trees when he realized he had forgotten his pocket tree guide back at school. Seizing an opportunity to impress the charming instructor, the eager girl pulled the same guide out of her back pocket, modestly exclaiming, “You can use mine, Mr. Grossman.” (Her friend Kathy would never let her live this down, bringing it up three years later in high school chemistry class.)

That girl was me (yes, I could be a kiss-up, especially when it came to science class), and I still have that book. This year, 2014, as I celebrate 30 years of medical and science writing, I think back to those early days when my love for science began to bud, ultimately blossoming into the career I have today. The image you see above is a sculpture that hangs in my office called The Beginning. It was created by Judith Modrak, a talented sculptor whom I met last summer at a University of Rochester alumni event.

Judith’s creations portray a variety of subjects. When I walked into her Union Square studio for the first time and perused her art, it was The Beginning that kept drawing my attention. The leaf reminded me of that day in the woods with my biology class. The cellular structure evoked memories of peaceful hours spent peering through a microscope to scrutinize the intricacies of cells.

The high school and college years that followed my middle school experience would be punctuated by science fairs, cat dissections (not everyone’s cup of tea, but I enjoyed it!), histology and genetics classes, and expensive chemistry labs. (I seemed to shatter the most expensive piece of glass equipment in my lab drawer each year in college, resulting in a “breakage fee” on my tuition bill on a semi-annual basis.) I had every intention of becoming a doctor, perhaps a pediatrician.

The journey was not entirely smooth, however. While I had excelled in high school science, I was so challenged by organic chemistry in college that I had to take it twice. I did not gain admission to any of the medical schools to which I applied. But I was not upset when I received no fewer than 22 rejection letters — nor was I dismayed by the reality of not becoming a doctor — so perhaps it was not where I was headed all along.

Like many medical writers, I “fell into the field” unexpectedly, working at a biomedical database starting in 1984. One thing led to the next: graduate school in New York University’s Science and Environmental Reporting Program in 1988; Senior Editor in the Public Affairs Department at Memorial Sloan Kettering Cancer Center (the first of my hospital clients) in 1992; departure from the security of a full-time job to freelance so I could be closer to my family after my son was born in 1999; and ultimately the creation of my own S-corporation, Foster Medical Editorial, Inc., after the change in my marital status in 2010.

Along the way, I have written for most of New York City’s major academic medical centers, been intrigued by the inspiration and drive of hundreds of doctors and scientists from across the country and around the world, and marveled at the strength of patients and families dealing with serious medical issues. I may not have become a physician, but I can hope that I have helped people improve their health through the print, video, and web projects I have produced — either by educating them to live healthier lives, or linking them with the medical professionals they needed to get better.

No, the journey was not what I expected. But it took me exactly where I was supposed to go. Looking back, I wouldn’t change a single step. And it all started with The Beginning.